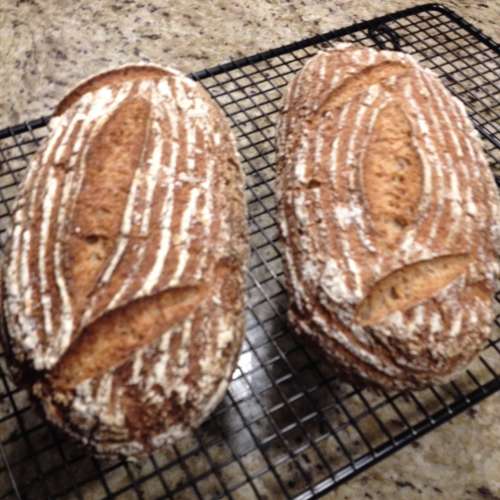 The staff of life.

Bread is a universal food. Our ancestors have been fermenting flour and water to make sourdough bread for centuries. It is even referred to as the staff of life and for good reason.

Simple wholegrain fermented bread has been a staple food that has sustained people groups of every tribe and tongue from across the globe. It has a cultural and biblical reference that goes back many millennia.

While hybridized wheat and gluten by-product saturation has become so over-used as a cheap filler in everything from commercial bread that contains extra gluten like vital wheat gluten, to fillers in meats, cheese, yogurts, crackers, oat by contamination with wheat, cereals, sauces, dressings, bouillon, seasonings, store bought broths, mustards, condiments, seasoning coatings on nuts and seeds and even in our shampoo's, mascara, toothpaste, and face creams. I believe with a return to traditional whole foods and long slow fermentation methods both with ancient gluten based grains, like spelt, barley, rye and kamut for those who can tolerate gluten/gliadin, or for those of us who cannot (even with long fermentation), using ancient gluten free grains and seeds, this beautiful food can be enjoyed as part of a deliciously wholesome lifestyle.

When my family and I needed to remove gluten completely from our diet, I thought "no big deal...." We had already done the GAPS diet, which is completely grain free to find some gut healing. However, after testing, I not only needed to remove wheat, barley and rye to combat my dermatitis herpetiformis (a skin condition related to celiac disease), but I also needed to remove bakers yeast! Now, that WAS a big deal!

While I had many years of experience with making traditional sourdough bread, I would come to discover that virtually every gluten free bread recipe I found required commercial bakers yeast (even the sourdough ones), and often double the amount, to help lift up all those GF flours.

I also found that almost all recipes asked for some type of gum, like guar or xanthan and a lot of sugar and starches. I was frustrated because I had changed our family over to a traditional whole foods lifestyle about ten years previous where I removed refined sugars and processed foods yet now I felt like I was being pushed back into the world of processed foods, or simply don’t bake.

While I am not opposed to small amounts of gums and starches in moderation, for example in certain pastry or baked goods. It wasn’t something I wanted as a part of my whole foods diet on a regular basis. I also found that if I had xanthan gum regularly, I experienced some digestive discomfort. If this is you too, then be very careful with MSG as well.

So…what is a bread-loving foodie girl who can’t tolerate gluten or yeast to do? Search, ask, experiment and be willing to fail and start again.

I have been so blessed to come across others on a similar journey and learn from them. In April of 2016, I attended River Cottage Cooking School in Axminster, England where I studied with Naomi Devlin. Naomi is a holistic food instructor who is also a Celiac. It was a fabulous course, with some great takeaways. I’ve also been in contact with Shauna James Ahern, The Gluten Free Girl and Samantha Sproul, of New Zealand who blogs on Baking Gluten Free. Samantha’s sourdough bread recipe was the inspiration for my master sourdough recipe I use in our classes.

All this to say, I still have much to learn but feel that I have been able to bring back a food that I love(d), sourdough bread. Learning the character of the various naturally gluten free grains, nuts and seeds take some practice, but it is worth the efforts as the fruits of your labor can produce a wonderful and nourishing home baked bread.

As I learn more, I will continue to share with our Co-op community and with anyone who is looking to have a naturally gluten free life based on whole food living.

Hmm, I think I'm going to go have a piece of GF sourdough toast now.